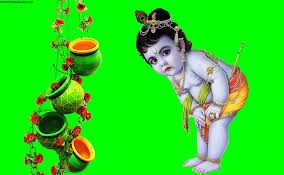 We’re amidst a beautiful experience of Little Krishna unleashing His childish mischievous acts on the cows and the cowherds. We’ve witnessed yesterday how Little Krishna played pranks on those who were milking the cows. He innocently goes near them and requests them for some milk to drink, as they’re milking the cows. At times when the cowherds refuse milk for Little Krishna, He suddenly unties the cow! As the cow is untied, it is starting to kick the cowherd who is milking it! As the cowherd is kicked away by the cow, Little Krishna goes beneath and drinks the milk directly from the cow itself! On a similar note, He tries playing pranks with the cows itself! He ties a small cracker to the cow’s tail and as the cracker bursts, the cow gets panicked and starts running all over the place! Upon seeing this, Little Krishna claps His hands and laughs loud! Many a times as Little Krishna is unleashing His pranks, people are admiring them and they too join in to have a hearty laugh! The entire Gokula is having a wonderful time with Little Krishna!

Moving on thus, we are now going to witness the beautiful event of Little Krishna trying to steal butter. As days pass by, Little Krishna starts going into each house in the town, crafts a “strategy”, steals all the butter from there and consumes it! What is that strategy? During the night, Little Krishna would go to bed along with Yashoda and Nandagopa and give an “innocent act” of sleeping tight! During midnight, after ensuring that all are fast asleep, Little Krishna sets out! He initially sets a target of the house that He has to perform his “Operation Butter” and during the wee hours of midnight, He ventures into that house carefully without anybody noticing Him. He searches His way to the place where the butter is stored and kept. As He finds the butter, he silently breaks open the pot, consumes all the butter, closes the pot and keeps it exactly at the same place from where He took it. After the “Operation Butter” is successfully enacted, Little Krishna would silently make His way back to His house, and sleep amidst Yashoda and Nandagopa again, as if nothing has happened at all! Thus, “Operation Butter” is extremely successful! 😊

As the daybreak commences, people in the house wherein the “Operation Butter” had taken place wake up to witness a huge surprise! The pot is exactly at the place where they had kept it last night, but only the butter is missing! 😊 On the first day, things look very mysterious for people. They obviously did not know that it was this Little Krishna who’s stealing all their butter. However, as few days pass by and as the same routine repeats, people get a doubt! Now who is that “mysterious culprit” stealing all the butter? They decide to investigate and lay a trap to find out! Thus, people plan a “counter-operation” to the “Operation Butter” to take on this “mysterious culprit”! They note the pattern of the “robbery” and on one night, as Little Krishna unfolds His “Operation Butter” (Quite as usual), there was a woman who is following this fellow at the back! Thus, as Little Krishna enters the house and begins His operation, she catches Him red-handed! This woman has “outsmarted” Little Krishna and has successfully thwarted the “Operation Butter” tonight! 😊

As Little Krishna is caught red-handed, His mouth and face are full of butter everywhere! This is such a beautiful sight and a treat for all of us, ardent devotees to watch and enjoy! As the woman sees Little Krishna in this fashion, she asks him, “Oh baby! Who are you? Why are you eating butter at this time of the night?” Of course, the woman did not get angry on the kid. She asks Him with all her love and compassion. As this woman asks thus, Little Krishna replies back, “I’m Balarama’s younger brother!” It seems that Balarama had a “very good image” amongst people of Gokula. 😊 He was known to be a very quiet and calm boy, but his brother Krishna was exactly the opposite! So, unwilling to reveal Himself by saying that He’s Krishna, He “smartly” introduces Himself as “Balarama’s brother”, in the pretext that people might let him off!

Now this woman asks Little Krishna thus, “My darling child! Why did you enter into my house at this time of the night? What are you doing here? Why aren’t you at your home?” Little Krishna answers back, “Oh! Since all the houses in Gokula are of the same kind and with the same structure, I couldn’t differentiate between my house and yours! So I accidentally entered into your house, thinking that it is mine!” As Little Krishna was giving daring answers thus, the woman was more amused than angry! She continues questioning Him thus, “Oh Okay! If that is the case, why did you keep your hands on the butter pot?” Little Krishna replies thus, “Oh! You know what? I was amidst all the cows of my house. Suddenly one of the little calves went missing somewhere. I went searching for it, and thus dropped into your house! I was thinking whether that calf would be somewhere inside this pot and hence I wanted to check it! That’s why I took this pot!” 😊 How innocent an answer is this! Upon hearing this, the woman started to laugh heartily! She asked again thus, “Oh Krishna! Did you find the calf inside the pot?” Little Krishna replies back thus, “Oh no! ☹ I couldn’t find it inside this pot! I was waiting to tell this to you and then leave from your place! Now that I’ve told you, I’m leaving!”

As Little Krishna says thus, He disappears within a jiffy, thus leaves the woman of the house, searching for Him! Next day, she hurries to Yashoda with a huge list of complaints about Little Krishna! Accordingly, Yashoda asks Little Krishna thus, “Oh Baby! Why do you want to go and steal butter from someone else’s house? We have so much of butter at our house itself isn’t it? You can eat how much ever butter you want. But, please do not go to another house and eat theirs!” Upon His mother’s request, Little Krishna stays back at His home for the next 3-4 days! He is not going anywhere outside!

Slowly on the fifth day, that same woman who lodged a huge complaint against Little Krishna comes to the marketplace and meets Yashoda there. She asks Yashoda thus, “Oh Yashoda! I didn’t see your son for the past 3-4 days! What happened to him? Is he fine?” Hearing thus, Yashoda was surprised and replies back thus, “Oh! It was you who came and complained to me about my son! I had instructed him not to go out anywhere. So he’s at my home only!” Hearing thus, this woman replies, “Oh Yashoda! It’s true that I complained against your son stealing butter. However, I’m longing to see him again. I’m missing Him so much. So, please can you send Him today to my place for some time?”

As Yashoda comes back, she conveys this to Little Krishna! Now what is the strategy that Little Krishna going to adopt? He has finally attained some “freedom to go out” and execute his “Operation Butter” again! He was thus waiting for a chance, and the chance presents itself beautifully before Him! 😊 Let’s wait till the next episode to witness the continuation of this beautiful experience! Stay tuned! 😊