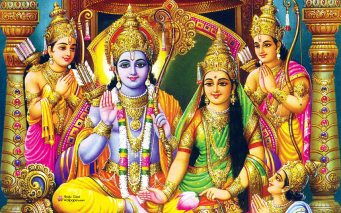 In the previous episode we had witnessed that Lord Brahma, Lord Shiva and all the Devas had assembled together in front of Rama, and all of them remind him that he is none other than Lord Vishnu himself who has incarnated in this world to finish off the wicked Ravana. Now that this mission is over and Ravana having been killed successfully, Lord Brahma makes a request to Rama to come back to Vaikunta. However, Lord Shiva and others oppose the idea and they emphasise that Lord Rama should go back to Ayodhya and rule the kingdom for some years before he can come back to Vaikunta. At this time, we had also witnessed that King Dasharata appears in person and grants Rama the boon of re-accepting Kaikeyi and Bharata as his wife and son respectively.

Now moving on, as Lord Brahma is watching all these happenings, he is also so impressed and wants to grant something to Lord Rama for his great achievement in restoring the Dharma in this world. Lord Brahma wants his contribution also to be there in this whole divine process. He thus requests Rama to ask for a boon of his choice. Accordingly Rama requests, “Oh Lord Brahma! Since many of these innocent and pure-hearted Vaanaras have unfortunately lost their lives during the war, I request you to bring all of them back to life! It is not their fault that they should bare the brunt of the war. It is only for me that they fought with their 100% effort. So, these innocent Vaanaras should not be punished for no fault of theirs!”

Upon hearing this, Lord Brahma becomes extremely happy and tears of joy trickle from his eyes. He never expected this from Lord Rama. He is proud of Rama’s magnanimity and immediately grants the boon!

Thus, all the Vaanaras who had lost their lives during the war, are now able to get back to their lives! All of them are surprised as each one of them are waking up with not even one injury mark on their bodies! What a miracle! All the Vaanaras including Sugriva and Hanuman are in tears of joy as they’ve got back their friends, fit and fine! They are so overwhelmed with happiness that they have no words to thank Lord Rama for this magnanimous act!

Next, Lord Rama turns to Vibhishana and asks him whether this same can be applied to the Raakshasas who had lost their lives because of one wicked Ravana. Upon hearing this, Vibhishana is surprised! However, unfortunately as Ravana had ordered all the dead bodies of the Raakshasas be thrown into the ocean, there is nothing left! Alas! Rama coulnd’t save the innocent Raakshasas who had lost their lives in the battle! The opportunity is lost!

As this is happening, Rama realizes that it is time that he should go back to Ayodhya immediately. The fourteen-year period has come to an end! It is to be recalled that Bharata is waiting eagerly for his brother’s return. Now if Rama delays his Ayodhya return, Bharata is going to end his life! Rama has this fear within himself and he doesn’t want Bharata to get into something untoward. Now that his mission has been accomplished – He has successfully killed Ravana, got back his beloved Sita safe and secure. It is now time for all of them – Rama, Sita and Lakshmana to make a move.

As Rama thinks thus, he has a doubt – How can he “quickly” make his way to Ayodhya, without wasting even a single minute? What can be done? For today, let Rama and Co. think over. We shall also wait till the next episode to find out how Rama reaches Ayodhya in “super-quick” time! 🙂