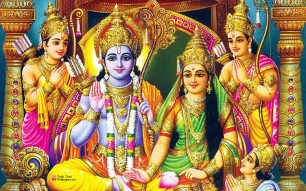 In the previous episode we had witnessed Ayodhya going into festive mode after fourteen long years. Lord Rama makes his way to Ayodhya along with his three brothers, Lakshmana, Bharata and Shathrugna. The victorious Vaanara army led by Sugriva, Hanuman and Angadha is accompanying them. Leading the way for everybody is the king of the Raakshasas, Vibhishana. Thus the entire caravan enters the borders of Ayodhya city, flanked by people on either ways of the path. Every house in Ayodhya is in celebration mood with aromatic garlands decorating the entrances. All people are at the entrances of their house to greet Rama as he passes by each and every house. The mood of happiness can be seen all across Ayodhya city.

As Rama makes his way through the streets of Ayodhya, he reaches the palace, which serves as a hub of the famed Ikshvaaku dynasty. The three mothers namely Kaushalya, Kaikeyi and Sumithra welcome the caravan with their love and affection. They are thrilled to bits upon seeing Rama after fourteen long years! Their happiness knows no bounds. Mother Kaushalya runs forward and hugs her dear son Rama. Finally she has managed to see her Rama again after fourteen years of waiting! What an emotional moment for the family!

Thus as Rama enters the palace, along with his three mothers he also meets the eight important saints – Vasishta, Vaamadeva, Jaabaali, Atha, Kaashyapa, Kaathyaayana, Suyagnya Gauthama and Vijaya who adorn the courtroom of Ayodhya. Rama bows down to each of the eight Maharishis to seek their blessings. All the Maharishis are extremely happy of Rama’s victorious return to Ayodhya and they initiate the proceedings for Rama’s coronation ceremony.

The preparations for the ceremony get underway now. The Vaanaras are instructed to bring the divine holy water from eight different directions and the four important oceans. The Vaanaraas led by Hanuman take up this assignment and travel to different directions to bring water in golden pots. Water is collected from ninety-six holy rivers across the world, northern, southern, eastern and western oceans.

Thus as the ceremony gets on the way, Lord Rama, along with Mother Sita is made to sit on the mighty “Simhaasana” (Throne) of Ayodhya. He is decorated with the “Kireetam” (Golden Crown) on his head as Sage Vasishta commences the proceedings with the divine chantings of “Manthras” (Hymns). He bathes Rama with the holy waters as the ceremony enters the important stage now. Now Lord Rama is declared officially as the king of Ayodhya – The successor of King Dasharata.

The ceremony is happening in an extremely grand manner, which the world hasn’t seen till date! Just like how Lord Indra was coronated in the Heaven (“Deva Lokha”) as the king of all the Devas (“Celestial Beings”), Lord Rama is now being coronated as the king of the whole world! This is not only a coronation of Ayodhya, but a coronation of all the leadership characteristics (“Kalyaana Gunaas”) of Lord Rama. Now, Lord Rama is our “Chakravarthy” (Divine Leader).

As the coronation ceremony is proceeding in full swing, Mother Sita has a small wish. She wants to felicitate Hanuman, who was the person instrumental behind Rama’s immense success. What does she do? How does she felicitate the great “Aachaarya” called Hanuman? Let’s wait till the next episode to witness the continuation of the grand coronation ceremony! 🙂