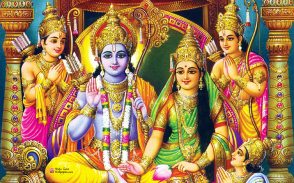 The previous episode witnessed a huge turn of events! All of us were waiting so eagerly for Rama and Sita to meet each other after ten long months of suffered separation. All of us know the amount of emotions Rama had for Sita and vice versa. Both of them were charged up and waiting eagerly to get to see each other. However, as Sita appears in front of Rama, he did not like the way she presented herself! Rather than welcoming Mother Sita with love and affection, Lord Rama had other plans in mind! He scolds her with harsh words, leaving Mother Sita stunned! At one point we had witnessed Lord Rama saying to Mother Sita, “If you wish to live the rest of your life here in Lanka, you may go ahead and do so! If you wish to see your relatives to Ayodhya, you may think of it and come with me! I’m okay with whatever decision you make!”

How can her beloved husband utter such harsh words? Has he abandoned her once for all? Mother Sita is clueless as she begins to sob bitterly! Hanuman and Vibhishana who are standing by the side of Lord Rama are shocked beyond words! What’s going on here? It is only to re-attain Mother Sita, did Hanuman cross the ocean, spoke with her in confidence, defeated Ravana and killed him in the war! It is only for Mother Sita, Rama too came all the way to Lanka. But what happened suddenly now? Why has Rama changed his stance? Nobody is able to guess! After a while, unable to bare the situation any further, Hanuman tries to ask Rama what happened to him all of a sudden. As Rama does not give a reply, Hanuman doesn’t know what to do! Whom does he support now? Rama or Mother Sita?

As minutes pass by, Mother Sita realizes what needs to be done. She has had enough of insult in front of everyone! She is now clear as to what to do! She calls Lakshmana by her side and says thus, “Oh Lakshmana! Some people can go to any extent to insult me in any manner possible! Some people have started having doubts on me and my chastity! Some people are trying to prove a point of savinism. For all those people, let me teach a lesson today! Let the world know today the power of a chaste woman! Hence, take some old logs of wood and create a pyre. Lit that pyre and let it start burning!”

As Mother Sita says thus, Lakshmana is shell-shocked! What is Sita going to do now? He asks back, “Oh Mother Sita! Don’t tell me that you’re going to jump into that fire! If you have such thoughts, please stop this! Nobody doubts your purity! Nobody has the right to do so too! Oh Mother! Please do not take Rama’s words so seriously!”

But Sita has made up her mind! She wants to prove her point! She once again instructs Lakshmana, “Oh Lakshmana! Do what I say, if you really treat me as your own mother! Don’t ask any question. I’ve made my resolve and I shall make sure that I would execute that – To the satisfaction of some people!”

These words from Mother Sita leaves Lakshmana gasping! Rama is also emotionally hit hard by these words too! Having no other option, Lakshmana looks helplessly at Rama’s face. As Lakshmana makes the arrangements for the pyre, Rama suddenly realizes what is going on! His beloved Sita is going to jump into the fire! But now it’s too late! Mother Sita is a woman of strong resolve! She is very clear in what she is doing! Now, Rama realizes his folly and as Lakshmana lits the fire, shouts aloud “Oh my dearest Sita!! I never knew you would take my words this seriously! You don’t need to prove anything to anybody! Your Rama knows your level of purity. Please refrain from jumping into the fire Sita! This Rama cannot be alive without you! Without Sita, Rama is not complete! Please do not leave me!”

However maybe Rama’s cry, Sita’s mind is very clear. There is no looking back! As Mother Sita nears the pyre, she quickly jumps into it, to the horror of everyone around! Lord Rama becomes speechless and falls on the floor as Lakshmana and Hanuman try to hold him steady! Mother Sita has really jumped into the fire, leaving everybody stunned!

For today, let us also try and digest the fact that out beloved Mother Sita has taken an extreme decision to jump into fire! What happens next? Are we going to see our beloved Mother again? Or, is she history? Let’s wait till the next episode to find out!