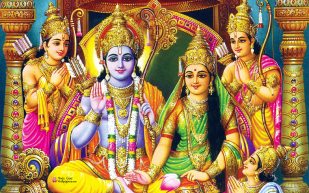 In the previous episode we had commenced witnessing a cracker of a battle between two greats – Lord Rama on one side and the powerful Kumbhakarna on the other! As time passes by, the fight gets more and more intense! Kumbhakarna is unable to understand the technique with which he can defeat Rama. In turn, Lord Rama is also puzzled as to how to tackle Kumbhakarna’s might! As the fight intensifies, Kumbhakarna grows into an enormous size and creates fear amongst the opposition ranks! Nobody could strategise a plan against Kumbhakarna. Even Rama’s powerful and pointed arrows are being rendered useless! Kumbhakarna is continuing to swallow hundreds and hundreds of monkeys!

At this point, Lord Rama realizes that arrows would not work against this mighty Kumbhakarna. Perhaps “Asthras” might! Now the question comes as to how would be able to use those “Asthras” against a man who is this huge a size? It is now that Lord Rama’s able and trusted messenger Hanuman comes to the rescue – The plan is quickly made!

Immediately from nowhere Hanuman jumps in front of Kumbhakarna and starts to grow into the size that is equivalent of him. As Kumbhakarna looks on, Hanuman quickly bends down, takes Lord Rama in his palms and rises up! Now Rama is able to look at Kumbhakarna more closely and is trying quickly to spot out weaknesses if any! As Rama’s shrewdness plays a key role, he immediately senses Kumbhakarna’s weakness in certain parts of his body – He immediately takes a pointed arrow and directs it towards his shoulders! The arrow multiplies into two and fire up towards Kumbhakarna’s broad shoulders. Even before Kumbhakarna could react to Rama’s arrows, his hands are cut off one by one! The Celestial beings that are witnessing this intense battle are baffled beyond words, as Kumbhakarna suffers first major damage!

As Hanuman continues to hold Rama in his palms, Lord Rama’s next target was Kumbhakarna’s thighs and legs! He again points a series of arrows towards his lower position and blasts Kumbhakarna with surprise! All these are just happening within the split of a second and within a wink of an eye! Rama’s speed knows no bounds! Unable to bare the sudden blast from Lord Rama, Kumbhakarna’s thighs are cut off too and he falls on the ground, gasping for breath and with immense pain! Now both his hands and legs are cut off from his body and we can imagine what kind of a pain is he suffering from!

As Kumbhakarna falls on the ground helpless, Lord Rama showers his unending mercy on him! It is to be noted by the readers that both Ravana and Kumbhakarna were Lord Vishnu’s doorkeepers at Vaikunta, by names Jaya and Vijaya. It is because of a curse that these two are born as Raakshasas who are enemies of Lord Vishnu.

Now that Lord Rama has neutralised Kumbhakarna, he knows that this same Kumbhakarna is none other than Vijaya from Vaikunta. It is now time for Kumbhakarna to go back to Vaikunta as Vijaya! Hence, Lord Rama shows his true form of Lord Vishnu as Kumbhakarna looks on!

This is a beautiful and an emotional scene depicted by Vaalmiki Maharishi. As Kumbhakarna sets sight on his beloved Bhagawan in full dazzling beauty, his mind flashes back on how he was forced by Ravana to go to the battlefield to fight Rama. He realizes that it was all a ploy created by Bhagawan to bring him back to Vaikunta!

Kumbhakarna is in tears! He says to Rama, “Oh Bhagawan! You have come all the way to Lanka from Ayodhya, just to liberate me to Vaikunta? This is just phenomenal and it shows how gifted and blessed I am! I just could not thank you by my words for what you’ve done to your ardent devotee! However, my only problem at the moment is that I do not have hands in my body to fold and salute you! Please do not mistake me for this!”

Saying thus, Kumbhakarna breathes his last! Lord Rama has granted him the highest “Moksha”! As Kumbhakarna passes away, Lord Rama acknowledges his sincere prayers and thanksgiving! Kumbhakarna’s devotion moves Lord Rama to tears! Upon seeing his own brother pass away in front of his eyes, how would Vibhishana feel? He falls on the ground and sobs uncontrollably as Hanuman and Sugriva try to comfort him a little bit!

As Kumbhakarna passes away, grief spreads all over Lanka and Ravana is just stunned and speechless! The whole palace is doomed with grief! Now what does Ravana do? Does he change his stance atleast now? Does he realize that he is losing person after person just because of his arrogance? We shall wait to find out in the next episode!