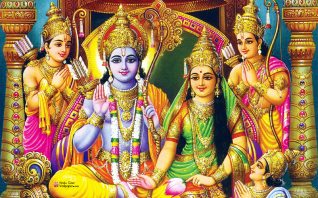 In yesterday’s episode we witnessed that Lord Rama is praying to “Samudra Raaja” (King of the oceans) for a solution to cross over to reach Lanka. Three days and three nights pass by and Samudra Raaja shows his negligent attitude by not appearing in front of Lord Rama. After the third night is gone, Lord Rama loses patience. He has had enough with Samudra Raaja. He wants to teach Samudra Raaja a fitting lesson! Hence he instructs Lakshmana to bring his bow and powerful arrows quickly. As Lakshmana brings them to him, Rama’s fury knows no bounds! He now locks one powerful arrow in his bow and is ready to let it go and attack the entire ocean!

It is at this point that Samudra Raaja is starting to realize his mistake! He is shaking with fear as to what would be the repercussion of Lord Rama’s powerful arrows! He immediately makes his appearance in front of Lord Rama and apologizes for his folly!

As Samudra Raaja tenders his apologies to Lord Rama, he says thus, “Oh Rama! You’ve pushed me into a paradoxical situation! It is you who had created this world with all the mighty oceans. Till this moment, nobody has ever thought about constructing a path across an ocean to reach another land mass! This is the first time that such a miracle is being prayed for – And that too, by the Creator himself! I did not know how to react to your prayer and thus I hesitated to appear in front of you all this while!”

Thus, Samudra Raaja bows in front of Lord Rama and seeks apology. However, Lord Rama has already locked a powerful arrow in his bow. Now since Samudra Raaja has apologized, Lord Rama thus says to him, “Oh Samudra Raaja! I’ve locked one arrow in my bow and this cannot be left as such! Hence, tell me if you have any enemy and this shall go and destroy that person!”

As Vaalmiki Maharishi views this scene, he himself was surprised! He thinks within himself “Oh wow! Only now I know that even Rama is a liar!”

Vaalmiki Maharishi could not understand how Lord Rama quickly changed his stance! Till now, he was furious with Samudra Raaja and suddenly he now says that this arrow is not meant for destroying him but his enemy! This is the significance of “Sharanagathi”! Now Samudra Raaja surrenders unconditionally to Lord Rama and look how Lord Rama changes his stance!

From this episode thus, the important message for all of us is that, if we truly surrender to Bhagawan’s feet, He is ready to change anything and everything for us! All what Bhagwan checks is that are we true in our heart while approaching Him! Now Rama says,

Thus Samudra Raaja replies back, “Oh Rama! In the north-west of India there is a place called “Dhruma-Kulyam” and there is a holy sea that borders it. In that place there are innumerable people who drink that holy seawater and inflict lot of troubles for me. Hence you may focus your arrow on that direction and destroy that entire place!”

Thus according to Samudra Raaja’s words, Rama turns towards the north western direction, flexes his bow and releases the arrow towards “Dhruma-Kulyam”. The arrow travels the whole of India, reaches “Dhruma-Kulyam”, destroys those people who were creating trouble and protects the sea that borders that place.

Thus, Samudra Raaja is extremely happy that Lord Rama has finally protected him and most importantly accepted is apology and surrender! He now shows Rama and Co. the way to build the bridge across the ocean towards the east, from the town of Rameshwaram (Velaavanam). What is that way? What is the method in which the bridge construction is going to take place? Who are those going to be involved in the construction? The action continues in the next episode! 🙂