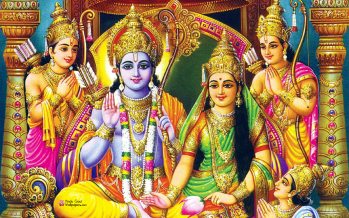 Moving on now, the debate restarts as to how to cross over to Lanka from here. Sugriva starts the discussion and Lord Rama immediately tells Sugriva, “Go and ask Vibhishana for a solution for this!” Accordingly, Sugriva goes to Vibhishana to ask his idea on this, and the reply that Vibhishana gave to Sugriva, shocked him completely! What was that reply? Vibhishana says,

Vibhishana says, “Oh Sugriva! If we’ve to cross the ocean by foot, ask Rama to surrender and pray to Samudra Raaja!” Sugriva was caught off guard with this reply – He thinks, “If this Vibhishana announces complete surrender (“Sharanaagathi”) towards our Lord Rama, how can he ask Lord Rama to surrender to somebody else? Is this the right approach to take?” Sugriva is confused now!

As Lord Rama listens to Vibhishana’s idea, he decided to pray to “Samudra Raaja” (It is to be remembered that Samudra Raaja is the king of the oceans). Thus, Lord Rama commences his austere prayers towards Samudra Raaja. Lord Rama in himself is an ocean of “Kalyaana Gunaas” and this ocean is praying to another ocean of salt water!

Thus Rama lies down on the shore of the ocean, keeps his head on the shore and commences his prayers towards “Samudra Raaja” for a solution to cross over the ocean. Lord Rama spreads the grass (Dharba) on the floor and thus places his head on the “Dharba” and commences his prayers. This is why we can witness even in the modern day, that there is a famous Vishnu temple by name “Dharba Shayana Perumaal” at the present day town of “Thiruppullaani” near Rameshwaram in the south-Indian state of Tamil Nadu.

Now Lord Rama is in the form of “Dharba-Shayana-Perumal” in Thiruppullaani and is praying towards “Samudhra Raaja” for three days and three nights continuously non-stop! Does Samudhra Raaja respond to Lord Rama’s “Sharanaagathi” and ardent prayers? He does not! Samudra Raaja did not care a damn to respond to Lord Rama’s ardent prayers! He never even cared to acknowledge Rama’s call!

Thus, Lord Rama is unfazed and continues his prayer. However, by the end of the third night, he loses his patience. He has had enough now! He quickly realizes that “Sharanaagathi” and prayers are not going to work anymore and it is the time to take the stick in hand! Now Lord Rama is clearly getting angry at the negligence attitude of Samudhra Raaja and he immediately searches for his long and powerful bow and arrows. He looks at Lakshmana with all his anger-filled eyes and says, “Oh Lakshmana! Bring my bow and arrows immediately! I’m going to evaporate all the water in this ocean with my powerful arrows and let all the monkeys march towards Lanka by land!”

As Rama is in anger, Lakshmana’s anger is double as that of Rama’s! He quickly rushes to the storehouse, picks up Rama’s powerful bow and a set of arrows and brings them to his brother in a jiffy! Rama takes the bow in his hand and locks one powerful arrow in it! He is now at his peak of anger and is determined to take “Samudhra Raaja” head-on!

What happens now? Does “Samudra Raaja” learn his lesson, or does he still remain lethargic? Does he appear in front of Lord Rama and apologize? The action continues in the next episode! 🙂