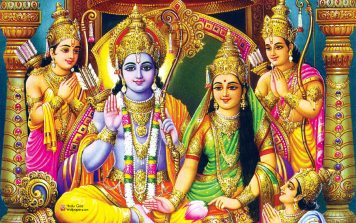 In the previous episode we had witnessed that the demonesses sitting around Sita were scaring and threatening her to death. They were completely focused on just that one point – Sita should marry Ravana immediately. As Sita refuses to budge to all their words, they were puzzled as to what to do next.

It is at this moment that Trijadha who is the daughter of Ravana’s brother, Vibhishana suddenly wakes up from her deep sleep. It is early morning by now she has had a “terrible” dream just minutes before she wakes up! She immediately gets scared by it and shouts at the demonesses who were threatening Sita. Trijadha says, “Oh Raakshasis! Please do not continue your threatening tactics towards Sita! You are bringing about your own downfall! I had just experienced a dream that I think is meaningful! So please listen to my words!”

Hearing this from Trijadha, the demonesses become interested in listening to her dream. They ask her to narrate it in detail. Trijadha narrates – “Listen! I just witnessed in my dream, Rama coming here along with Lakshmana. They were very charismatic and were full of immense brightness like that of a sun! And I saw them taking Sita along to Ayodhya. At the same time, I also saw Ravana shaving his head completely! His body was bathed in oil and was being pulled by a woman in the southern direction (Normally the southern direction is associated with the “Yama-Patnam” – Those who have to meet a trageic death because of their wrong doings in life, are considered to proceed towards the southern direction, where the Yama Patnam is considered to be!) I saw Ravana meeting such an end – Along with other people like Kumbakarna and other important ministers in Ravana’s cabinet! Whereas, Sita is so happy as she holds Rama’s hand in hers, who then takes her to Ayodhya along with Lakshmana!”

Trijadha continues, “Moreover, I also saw in my dream, a monkey who is coming to Lanka city as a spy, setting fire to the whole city! It was really a tragic sight wherein, people were running here and there to save themselves and their family. If such things are going to happen in real, then I think it’s better that we do not continue the mistake of harassing Sita anymore! Run somewhere else! Go and protect yourself from the great danger that I foresee! This was an early-morning dream and hence there is a high possibility that this might come true! The only way to get rid of this great danger according to me is that we should surrender to Sita’s feet and ask forgiveness to what has been done to her! She is the only person who can protect us from Rama’s anger. Hence, let us all request Sita to forgive us for all our mistakes!”

Upon hearing this from Trijadha, the demonesses were afraid for one moment and at another moment they reminded themselves of Ravana’s stern instruction to them. They were confused as to which way to go! Should they continue harassing Sita? Should they seek Sita’s forgiveness? Which way did they choose? What happened next? Let’s find out in the next episode!