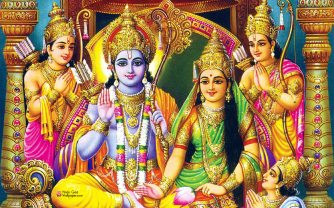 In the previous episode we experienced the different unique physical features of our beloved Bhagawan in the form of Lord Rama, as described by Sage Naarada to Valmiki Maharishi. Of course, Sage Naarada doesn’t stop with just describing His unique physical features alone and he continues to describe His specialties in various other aspects too. What are those aspects? Let’s witness today!

Sage Naarada continues in his description of Lord Rama:

Here, Sage Naarada describes that Lord Rama had a very beautiful quality of looking after everybody and everything equally. In other words, it means that Lord Rama knows how to balance between looking after his family as well as His kingdom. In modern day corporate we talk about the concept of “Work-life Balance”, that is, the capability of a person to focus equally on his/her professional life as well as family or personal life. It can be of great interest to the readers that this particular concept was already in existence thousands of years ago and this is exactly what Lord Rama was known for. Since He was able to govern the Ayodhya kingdom without even the smallest blemish and this is the reason why we still praise His governance as the “Rama Rajya” and this also serves as a benchmark for the modern day functioning of our present-day government too! However at the same time, He never compromised the quality time that He spent with His beloved wife – Goddess Sita Devi. That’s why even today when we talk about Lord Rama we never talk about him alone. He’s described as “Mythilithan manavaalan” in Tamil and “Siya ke Ram” in Hindi – both of them mean that He’s always Goddess Sita’s Rama. Hence, Sage Naarada concludes by saying that it is this Rama who’s also the dearest son of Kaushalya Devi (Wife of King Dasaratha) who is also the embodiment of all the sixteen noble qualities that Valmiki Maharishi asked!

It is to be noted by the readers here that when Sage Naarada mentions all the above qualities of Lord Rama, it can be implied that by the time Sage Naarada meets Valmiki in his ashram, the entire story of Ramayana had already taken place. In other words, Rama had returned back to Ayodhya after fourteen years of exile and has been crowned the King of Ayodhya and it’s only after this, that the meeting between Valmiki Maharishi and Sage Naarada is taking place. But, it is also to be noted that Lord Rama is still continuing to rule Ayodhya at this point in time and He had not yet returned to his abode of “Vaikunta”.

Thus, Sage Naarada concludes, “Oh Valmiki, so far I’ve been speaking about Lord Rama, who’s an embodiment of all the noble qualities that you had mentioned. And, He, with all his might and valor destroyed the entire Raakshasa (Demon) clan and coronated Vibhishana (Brother of Ravana) to the throne of Lanka and thus got into the “Pushpaka Vimaana” and returned back to Ayodhya! Hope you must have listened to it carefully!” In this way, Sage Naarada narrates the entire Ramayana story within 32 slokas and it’s known as “Samkshepa Ramayana”.

With the above sloka, Sage Naarada also adds that Lord Rama had got both His beloved wife Sita Devi as well as the kingdom that He had lost. This implies that by this time, Rama had already got back his kingdom and had started ruling it. He also adds how many years would Lord Rama rule Ayodhya and when would be return back to Vaikunta. It’s a beautiful sloka that follows:

Every text in the Hindu Literature would consist of something called as “Phalastuthi” at the end, which means “The benefits of reciting this text”. Sage Naarada, before leaving Valmiki’s ashram describes this “Phalastuthi” to Valmiki Maharishi at the end of his “Samkshepa Ramayana”. What does he say in that? What are the benefits of reciting the Ramayana as per Sage Naarada? Let’s wait to find out in the next episode!