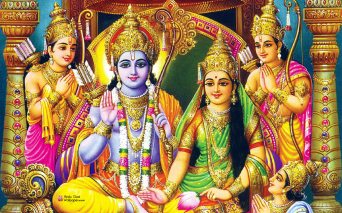 In the previous episode we had witnessed that Mandodhari gives a final attempt to convince Ravana to change his stance on Sita. She gives him valuable advice and requests him to relent in his stance and to mend his ways in the right direction by not going behind other’s wives. But does Ravana listen? What is his answer to Mandodhari? Let’s continue today.

As Mandodhari finishes her accord, Ravana is both emotional and at the same time, angry. He couldn’t digest the fact that even his wife doubts his capabilities. Thus, rather than relenting from his stance, Ravana instead tries to answer back his wife. He says, “Oh dear Mandodhari! I deeply understand all your concerns! I know that it was a terrible day for me at war yesterday. However, please do not doubt on your husband’s capabilities. Your husband has all the capabilities to emerge victorious in todays’ war. Rama will be history today. Rama will realize during the course of today’s war that he was testing a wrong person and would reap consequences for his actions. This Ravana is capable of anything and everything in this world. Even the Celestial beings are afraid of me. If that is the case, then who is this Rama? He is after all a miniature and an ordinary human being! What can he do to this mighty Ravana?”

As Ravana replies thus with arrogance and over-confidence, Mandodhari is in tears and is sobbing bitterly. She is trying her best to save her husband from the brink. However, Ravana is not ready. Mandodhari tries one last time to convince Ravana, “Oh Ravana! My dearest husband! I know that you are capable of accomplishing anything and everything in this world! Confidence is good, but overconfidence is dangerous! Please think for a while before you proceed to the battle. If you think for a while, you would understand what I’m trying to tell you! Rama is not that easy a person to defeat in a battle. The best way to defeat Rama is by doing good deeds and by seeking forgiveness to him. Please hand over Sita to him. What is the use of having Sita in our place? Sita has only caused destruction to you and to Lanka. Let us not do this any further. Please pay heed to your dear wife’s words!”

Even after Mandodhari’s repeated requests, Ravana’s heart refuses to relent. He looks at Mandodhari in anger and says, “Oh Mandodhari! I never expected your words to be this way. I thought that you would stand beside me to motivate me to win the war against this Rama, however, you’re asking me to act like a coward! Rama is the reason for Lanka’s destruction. I agree! But please note that it is my duty as a king to seek revenge for Rama’s atrocious act! I shall definitely teach Rama and Co. a fitting lesson today! Please do not stop me!”

Saying thus, he thwards Mandodhari and starts for the war. The entire Vaanara army is at the verge of wrapping things up and is waiting for Ravana’s arrival on the battlefield. As Ravana arrives, a fierce battle commences again. Again, Lord Rama is directly spearheading the Vaanara army under the able guidance of Vibhishana. Ravana comes prepared to take on Rama and the marquee battle begins yet another time!

This time Ravana has decided to go all out against Rama and Lakshmana – In fact, he doesn’t have another option if he has to win! The fierce battle commences and once more the world comes to a complete standstill. The battle continues for seven days and seven nights continuously without a break! As Ravana unleashes one “Asthra” after the other, Lord Rama has the equal ammunition in him to counter everything! Similarly, Ravana possess all the required ammunition to counter Rama’s surge. As the battle continues on and on, the Devas and other Celestial Beings become extremely anxious! Nobody can predict as to who is running away with this!

As the marquee battle enters into the fourth, fifth and sixth days and nights, Ravana’s army starts losing steam slowly! The Vaanara army spearheaded by Rama, Lakshmana, Sugriva and Hanuman make significant inroads into Ravana’s (already) weak army. Not to forget that Vibhishana knows the strengths and weaknesses of the opposition and Rama has no problems tackling any kind of assault from Ravana. It is at a point during the final night that Ravana is running weak on ammunition and arms – The Vaanara army manages to destroy the whole Raakshasa army successfully.

Now again, Ravana is left alone to defend himself but this time, Ravana is not going to give up even when he is all alone! He still has some tricks left in his book to unleash! However in the process, the tricks slowly start backfiring at him and Lord Rama gives one final blow with all his power-packed fury, pushing Ravana to the ground – Once and for all!! Ravana is completely defeated now and Lord Rama along with the Vaanara army are all over him! It is at this stage that Ravana finally gives up and accepts the defeat – But it’s too late! Ravana’s life is in extreme danger as he is injured beyond limits!

As Ravana falls on the ground, the entire Vaanara army is up on their feet to celebrate victory! Lord Rama has a glance at Ravana who is battling the last stage of his life. Let the Vaanara army keep rejoicing the victory for today. However, does Lord Rama have a message for Ravana at this moment? What is that message? Does Ravana realize his mistake atleast now? Let’s wait to answer all these important questions in the next episode!