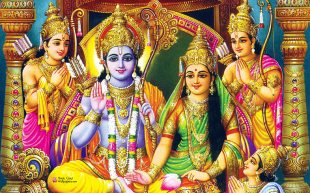 In the previous episode we had witnessed that Indrajith lures Lakshmana into a trap wherein he drags and isolates Lakshmana to a lonely spot. A fierce battle commences, as Lakshmana is growing more and more furious! As Lakshmana is deeply into the fight, he fails to realize that Indrajith is an expert in creating illusions! According to the trap, Indrajith suddenly vanishes from that point, but arrows keep coming towards Lakshmana from all four direcions! Lakshmana is clueless now and finally succumbs to Indrajith’s asthra, which has the power of inducing an electric shock-like feeling. Unable to bear the impact of the powerful shock, Lakshmana falls on the ground unconscious.

The trap has worked extremely well for Indrajith as he roars in laughter! However, it is at this point, Indrajith again makes a similar mistake like the last time – Upon seeing Lakshmana unconscious on the floor, he wrongly interprets Lakshmana to be dead and hence he leaves that place without ensuring that Lakshmana is completely finished! Now how much is this going to cost Indrajith? Let’s wait and witness!

As Lakshmana is now unconscious on one side, let us look at what happens at the Vaanara camp. As the news spreads that Lakshmana has gone missing from nowhere, Lord Rama is deeply concerned! What could have happened? Nobody is aware of Indrajith’s strategy to pull out Lakshmana this way! The search begins – All the Vaanaras are going in different directions to check the whereabouts of Lakshmana. Finally it is Hanuman who spots Lakshmana amidst a bushy area lying unconscious and hurt very badly! Upon seeing Lakshmana in this condition, Hanuman quickly understood what had happened! Clearly it was Indrajith’s ploy to create some disruption like this in a cowardly manner! Hanuman’s anger knows no bounds, however his anger is not going to work at this moment as he has bigger things to worry about – It’s the question of Lakshmana’s life and survival! What can he do now?

Hanuman immediately carries Lakshmana’s body to the place where the Vaanaras and Lord Rama are currently camping. Upon seeing Lakshmana’s condition, Lord Rama is aghast! He could not believe his eyes for a moment! Rama now fumes and vents his frustration! He cries out aloud saying thus, “Oh Lakshmana! What kind of a blunder have you committed? Don’t you know that Indrajith is a smart fellow to use illusionary powers? Before attacking an enemy you should strategise your plans and then attack. How did you attack him blindly? Atleast you should have consulted me before going ahead! Now look at what has happened!”

Rama’s sadness knows no bounds now! Nobody knows how to bring Lakshmana back to life! He continues to lament, “Oh Lakshmana! My dearest brother! Before leaving for the forest, I advised you not to accompany me! You should have been at Ayodhya along with Bharata and Shathrugna and led a happy life with your Urmila! Now you’ve followed me and I’ve been rendered helpless to protect you! Now how would I go back to Ayodhya without you? What answer would I give Mother Sumithra? How will she be able to digest the fact that her son is no more? What would I say to Urmila? What what guts would I go and tell Urmila that her husband is no more? Oh Lakshmana! My dearest brother! You were everything for me in these fourteen years of my forest life! My life without you is a complete waste!”

Saying thus, Lord Rama is in tears and is unconsolable! For today, let us try and share Lord Rama’s grief and make him feel a bit comfortable! What’s going to happen next? How does this sad episode end? Who is going to take up this responsibility? Let’s wait till the next episode to find out!