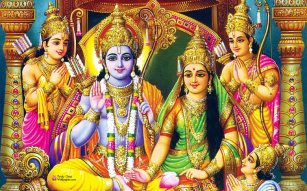 In the previous episode we had witnessed one of the most inmportant events of the entire Ramayana text wherein Hanuman finally spots Sita after a treacherous effort of search that spanned all over the city of Lanka, including Ravana’s “Pushpaka Vimana” and various areas of Ravana’s palace. As Hanuman searches through the “Ashoka Vana” for one final attempt, he is able to spot this woman who is surrounded by around 14,000 demonesses guarding her 24*7. Tears are flowing from her eyes all the time. A big sorrow surrounded her life and it loomed large on her beautiful face! As Hanuman recollects the various identification marks that Rama had mentioned to him, and also from his own memory of seeing her once, he finds out that all these identities matched perfectly with this particular woman! Thus Hanuman concludes that finally he has seen Goddess Sita Devi! His happiness knew no bounds as he immediately worships Lord Rama from that very place and thanks him for giving the opportunity to witness Sita Devi.

Thus Hanuman has a look at Sita as he is in tears of joy and happiness! Valmiki Maharishi gives a detailed description as to how Sita looked like at this point:

He explains that Sita was just dressed in a single cloth that seemed unwashed for so many months. She was looking tired and dirty, as she hadn’t taken a bath for months together! Since she hasn’t had proper food too, her body had become slim. However, her charisma on her face remained the same with all her beauty in her eyes! She was having Rama in her mind and heart, every single minute! She was longing to see her Rama and to hug him with her. Seeing this, Hanuman thinks within himself,

“Oh!! What a sad sight! Such a beautiful Sita with all her thoughts focused on Lord Rama and who is also the mother for this entire world (“Jagan-Maathaa”) suffering amidst these evil demons and demonesses in this Lanka! What a ghasty sight is this!” Valmiki Maharishi gives a beautiful comparison at this point: He says that Sita is looking like an innocent deer, which was caught in between a group of foxes! Just as how this deer would long to be in the presence of its other fellow deers, Sita was also longing to be in the presence of her beloved Rama!

As Hanuman was thinking on, he also sees around Sita, a bunch of ornaments that were hanging from the smaller branches of the “Simshuba_Vriksha” under which, Sita was sitting. Hanuman recollects, “Oh yes! All these are the ornaments, which Rama had told me as identification marks to trace Sita. All of them are here. Moreover, look at the Godliness in Sita’s face! The surrender of Rama towards Sita and Sita towards Rama look exactly the same! Here, Sita is longing for Rama’s presence. There, Rama is longing for Sita’s presence! Both of their thought processes, surrender, sacrifice and love for each other are exactly the same! This Sita seems like she is exactly made for Rama and Rama seems like he is exactly made for this Sita! How on earth is it possible for a couple to be this similar in everything? I’ve never seen something like this before!”

The readers might remember that, during the “Kishkinta Kaanda” I had mentioned an interesting point – Wherein, when all the Vaanaras were getting ready for the search mission, Hanuman was the only person who was completely out of sorts and totally disinterested in the whole thing! Hanuman at that time was under the impression that, “Oh! Just because of this one woman, why is the entire population of Vaanaras being called for? Can’t Rama live without this woman in his life? Instead why is he troubling everybody around?”

But now, after Hanuman sees Sita Devi he says within himself, “Oh my goodness! What kind of a wrong thought that I was having in my mind! So far I’ve been thinking that Rama is wasting everybody’s time and energy by asking us to search for this Sita! But now I realize that Rama is doing a phenomenal job by waiting for the right time to see this Sita again!”

Hanuman thus thinks that Rama is doing something that is not possible for others to do – He is waiting patiently to see this Sita again in his life. Similarly, Sita is way too patient to see Rama again in her life! Rama should have given up his life because of the huge sorrow that he is undergoing currently! However Rama is alive and fully motivated to fight Ravana, finish him off and see Sita again!

Thus, Hanuman spots Sita, (who is perfectly made for Rama) in the Ashoka Vana. His mission is half-over now! The next part of the mission is that he should somehow converse with Sita, let her know that Rama is on the way to protect her. How did he manage to do that? Was he able to talk to Sita straightaway? What happened next? The action continues in the next episode!