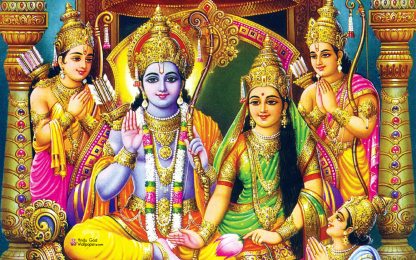 As described above, one day while Valmiki Maharishi and his “Sishya” (Student) Sage Bharadwaja were living together, the great Sage Naarada comes to visit both of them. This is the first “Sarga” (Chapter) of the “Baala Kaanda”. The following sloka (verse) depicts the significance of Sage Naarada.

The above sloka conveys the message that Vaalmiki Maharishi who’s described as “Muni pungavam” (The greatest of all sages) starts a conversation with Sage Naarada. The phrase “Tapaswaadhyaaya niratham” enumerates the unique significance of Sage Naarada. It conveys that Sage Naarada is an embodiment of “Tapas” (Ardent devotion) towards Lord Vishnu. “Swaadhyaayam” means chanting the Vedas over and over again, which in turn implies that Sage Naarada is a scholar of all the sects of the Vedas. The next phrase “Tapasvee vaagvidaam varam” means that, Sage Naaradha also has that unique art of effective communication, along with the knowledge of all the Vedas.

From the above explanations, we can infer one important dharma: What are the three effective characteristics of an “Aachaarya” (Guru or a Spiritual Master)? The first characteristic is that, he/she should be a master of all the “Shaastras”. Once the mastery over the Shaastraas is accomplished, the person should be excellent at implementing the principles as described by the “Shaastras”. Only then he/she can be an example to follow for his/her sishyas (students). If these two characteristics were present in the Aacharya, then he/she would easily attain “Moksha” (Salvation). But as their students, how will we be able to attain the salvation? Here is where the art of effective communication (Vaagvidaam Varam or “Vaak Chaathuryam”) is very important. Only then, the Aacharya would be able to teach and guide us effectively to the path of the ultimate salvation. Hence, it is said in the above sloka that Sage Naarada was an embodiment of all these three characteristics and thus, he’s referred to as the “Spiritual Master” of the highest level!

The conversation begins with Vaalmiki Maharishi asking Sage Naarada a set of sixteen questions, which indicate sixteen different “Kalyaana Gunas” (Noble qualities). Vaalmiki Maharishi intends to ask Sage Naarada if there is one person currently living in this world, who’s an embodiment of all these sixteen “Kalyaana Gunas”. Normally, the number “Sixteen” is very special and auspicious. Here’s a popular saying:

This saying conveys the message that the Moon (Chandra) is an embodiment of sixteen “Kalais” (“Kalai” here means “Intense and brilliant Radiance of white light” from the moon). This radiance of the moon’s light would decrease gradually during the “Krishna-paksha” (The time period between the “Full-Moon day” and the “No-Moon day) and increase gradually during the “Shukla-paksha” (The time period between the “No-Moon day and the “Full-Moon day”). It’s well known to everyone that this process of increase and decrease of the moon’s radiation is the work of the Sun. If the moon is full with all the sixteen “Kalais”, then it’s called “Poorna Chandra”, meaning “Full Moon”. Now whom are we talking about? We’re talking about “Rama Chandra”. So for “Rama Chandra”, these sixteen noble qualities make him as beautiful as a “Poorna Chandra” (Full moon). Of course, Lord Rama is not only an embodiment of just sixteen noble qualities – It’s much more. In fact, the amount of “Kalyaana Gunas” that Lord Rama possessed is countless.

So, what are those sixteen qualities that Valmiki Maharishi mentions in his questions to Sage Naarada? Let’s see in detail in the next episode!!