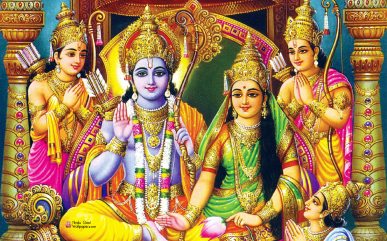 In the previous episode we saw the significance of Valmiki Maharishi, who composed the Ramayana text with a great expertise. We also came to know yesterday about the location of Valmiki’s ashram, which is hailed and worshipped as the birthplace of Shrimad Ramayana.

Starting from today, we shall go into the excerpts of the Valmiki Ramayana little by little everyday. I shall explain the “Charitra-Bhaaga” (Outline of the main story) a little lesser, and focus more on the in-depth meanings and the underlying significance of every instance of the story. I take this approach because, the outline story is very prominent and it’s known to most of us. Today we shall start on a general note and see the significance of various “Avataars”  (Incarnations) of Bhagawan, and subsequently in the following episodes, move specifically into the Rama Avataar.

Why does Bhagawan take birth repeatedly? What does he do in every incarnation? To answer the first question, the main purpose of any incarnation of the Lord is to restore and re-establish “Dharma” (Righteousness) in this world. This is exactly what Bhagawan Shri Krishna says in the Bhagawat Gita:

The above two slokas (verses) intend to convey the clear message to us that, whenever there’s a downfall of “Dharma” in this world, then and there Bhagawan incarnates himself to restore it. But how does He restore the Dharma? It is, by destroying the evil elements that spurt out in the world and thus by protecting the people who follow the path of righteousness throughout their life. The above statement not only holds true for Shri Krishna’s Avataar (incarnation), but also holds true for every other incarnation. Hence we can clearly see that “Restoring the Dharma on earth” is Bhagawan’s most important priority during any incarnation.

We’re now in the “Kali yuga”, and Bhagawan is yet to incarnate in this world. The average number of years in Kali Yuga is 4,32,000. However, we’ve just seen 5,110 years of it. What does Lord Krishna say in the above-mentioned slokas? When does he say that He would incarnate again? He says, “Yadaa yadaa hi dharmasya glaanir bhavathi bhaarata” – Meaning, whenever there’s a downfall of Dharma, I’ll incarnate. Since He hasn’t incarnated still in this Kali Yuga, we can presume that Dharma hasn’t seen any downfall yet till now – Whatever we’re experiencing and witnessing today, is just a miniscule portion of “Adharma” (unrigteousness). If that’s the case, it may even be very hard for us to imagine the state of the world when there’s a real downfall of Dharma!

However, it’s said in the “Bhaagavata Puraana” that the Lord will incarnate at the end of the Kali Yuga in the form of a ferocious man atop a white horse with his sword dazzling like that of a star or a comet. It’s also said that He’ll incarnate at the banks of river “Thaamiraparni” in the Tirunelveli district of the present-day Indian state of Tamil Nadu. He’ll go around in his horse and destroy all the unrighteousness in a ferocious manner with His dazzling and lethal sword.

Now having seen the general purposes of the Lord’s incarnations in this world, we’ve to see next, the specific purposes of Lord Rama’s incarnation. What are they? Let’s wait till the next episode to find out!!