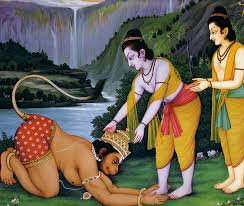 In the previous episode we understood the significance of body language of the speaker, while delivering an address. Special emphasis was given to the facial expressions of the person while talking. In today’s episode we would see and appreciate the importance of “Speed” while talking. What does Rama had to say about Hanuman in this particular context? Let’s read on!!

Rama continues in praise of Hanuman:

Rama explains here to Lakshmana that Hanuman has maintained the same speed of speaking throughout the entire duration of his speech.

Here are extremely important corporate learnings: Rama explains that, while delivering a lecture or an address, care should be taken so as to ensure that there is a uniformity in terms of speed and also in terms of the tone (Dhwani). In some cases we might have seen that people start talking at a high tone and putting in lot of energy into it, with long sentences and without taking a breath or a pause in between. This would easily result in the orator becoming tired and exhausted mid-way and because of that, he/she might even start struggling for words. It’s well known that such ways of talking are not permissible in a professional set-up. So, the learning from this verse is that, we should maintain a medium and a uniform speed of talking throughout the entire duration of the conversation.

If the speech is delivered too quickly (for instance, 180-200 words per minute), the orator might not be able to establish a good connect with the audience. On the contrary, if the speech were delivered way too slow with too many pauses in between, this would invariably make the audience go off to sleep! Here, we can understand and infer that both the extreme variations of speeds are not acceptable and thus, a balance should be achieved so that it’s neither too fast nor too slow.

Also, Rama continues to say that Hanuman always had a pleasing smile throughout his oration. This is a very important aspect while talking. A pleasant face is to be maintained for the entire duration of the talk. This is directly related to the psychological aspect of listening and grasping in a human being. Anything that is conveyed with a smile and a pleasant look has more probability of being grasped and interpreted by the audience.

So Rama says here that Hanuman is giving an excellent oration only because he has gained mastery over all the above skills.

In addition to this, there are four very important but subtle aspects that are necessary to give an impactful lecture. What are they? Let’s wait till the next episode to find out!!