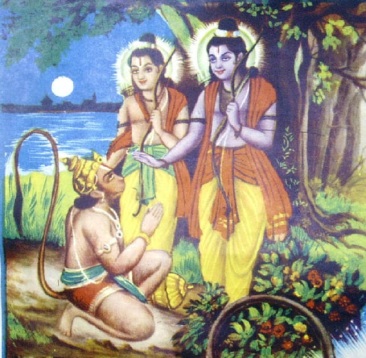 In the previous episode we witnessed how Rama and Lakshmana were amazed and taken aback with the way Hanuman had spoken with them for the first time. We also saw that Rama asked Lakshmana to reply to Hanuman and also the reason behind it. Lakshmana is about to start his reply and Rama interrupts him. What did Rama say to him? We shall see the answer in today’s episode.

Lakshmana is curious and asks Rama why did he stop him even before he started talking. Rama replies that he had never listened to such an excellent and a brilliantly compiled speech from anyone in his life so far. So he cautions Lakshmana to be careful in the way he replies.

Rama goes on further to explain in detail how he admired Hanuman’s speech. Rama has a unique distinction called “Vaakmi Shrimaan”, meaning “An expert in talking”. If Rama himself has to appreciate someone else for his or her speech, we can infer the significance of Hanuman in this context – He has the unique status of being the “Aachaarya” meaning, “The Supreme Teacher” (I shall explain in a later context, why is Hanuman considered to be in this status). Also, one can observe that in the entire Valmiki’s Ramayana there are very few instances wherein Rama praises anybody else, but here, he’s in full praise and appreciation to the way Hanuman crafted his speech.

This is going to be a good learning for all of us – How to deliver an excellent and an eye-catching speech? How do we conduct ourselves in front of a group of audience? What are the things to do and things to avoid?

Rama himself gives a detailed accord and says that all these characteristics are imbibed in Hanuman and that’s the reason why he talks so well! To begin with, we can look into a verse from a very famous text called “Thirukkural” written by Thiruvalluvar in Tamil. It states the following:

Thiruvalluvar says that, a person should never employ a bad or a filthy language to address another person, whomsoever he/she might be. The language that we use should be pleasing for the audience to listen to. People should not feel irritated or bored in listening to our talk. Hence in this way, Rama tells Lakshmana through five to six slokas (verses) on the important characteristics of an excellent and a well-crafted speech.  Starting today, we shall explore one by one in subsequent episodes to gain a detailed understanding.

In this above verse, Rama says that if a person hasn’t learnt the Rig Veda or Yajur Veda or Saama Veda thoroughly, he cannot talk excellently like this. We can note at this point that, by learning each sect of the Vedas, one can attain different characteristics.

Only if one learns the Rig-veda thoroughly, he would be able to get the “Politeness” and “Humility” (also called “Vinayam” in Sanskrit) while talking.

Only if one learns the Yajur-veda, he will attain the power of “remembering” things (also called “Dhaarana Shakti” in Sanskrit) in his mind perfectly. This is because, in Yajur-veda there are lots of verses that are very tough to pronounce, read and remember. Only if a person by-hearts the entire text and keeps recollecting it frequently, he would be able to remember everything. Hence, here comes the significance of having a good memory through adequate reinforcement of the learning.

Only if a person learns the Saama-veda, he would attain the power of shrewdness and the ability to understand the depth of a subject easily (also called “Vaidushya Buddhi” in Sanskrit).

Hence, it is evident from the first sloka (verse) that an orator should be able to imbibe “humility” in his talk, coupled with the power of remembering the subject with adequate capability of memorizing and reinforcing it in his/her mind. Also, for the address to be effective, the speaker should be able to understand and explain the subject in an “In-depth” manner.

Rama says that only because Hanuman has a mastery over every sect of the Vedas he’s able to craft his speech this well.

What are the other essential aspects of a well-compiled speech? We shall wait for the next episode to find out!!